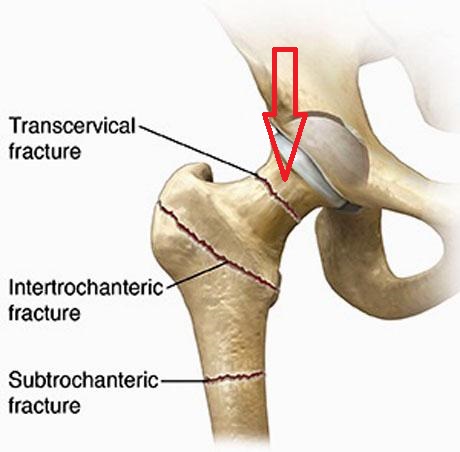 The fracture of the femoral neck (subcapital - transcervical) is considered to be an intra-articular fracture as opposed to the transtrochanteric considered extraarticular.

The subcapital fracture is one of the most common fractures that occur in the elderly people. This is due to the increased incidence of osteoporosis in these ages. Other contributing factors include reduced balance, muscle atrophy, reduced vision, neuromuscular disorders and, often, the disorders of saliva - malnutrition of the elderly.

It usually occurs after a person falls on the ground without particular violence in the older ages. At younger ages it may happen but it takes more energy to cause it - high energy injuries.

Clinically the person with a hip fracture has:

The patient should be transported directly to the orthopaedic emergency department with an ambulance where he will be subjected to clinical and radiological examinations to confirm the diagnosis.

The modern technique ALMIS hip arthroplasty relates to minimal invasive joint replacement since during joint exposure the muscle structures are not cut but separated by creating a ‘contoured window' through which the surgery is conducted.

The advantages of ALMIS including the immediate and painless mobilization of the patient after surgery which minimizes the days of hospitalization and allows the patient to faster restoration of social and professional activities.

A further advantage of the method ALMIS over other minimal invasive methods is not use mechanical traction system of the lower limb during surgery may cause complications.